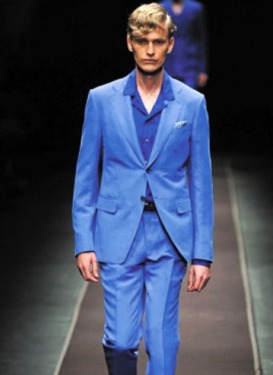 For a long time, we have been waiting for a moment of change: the second time in modern fashion. The last time it was dominated by paul poiret in the early 20th century, he freed modern fashion from the constraints of the body. A hundred years later, in the men's fashion world, brands such as zegna and valentino have begun to explore the â€œnew toolingâ€, which broke the traditional concept of work clothes. The audience of traditional suits may only be in the financial circle, but more and more men are eager to release their souls from suits. Traditional tooling is concentrated in manual laborers. However, with the development of society, the boundaries between the types of work and industry become more and more blurred, how to wear suits in the end, and what occasions to wear, such a dress issue has finally been the designer's attention.

Through the use of the tertiary industry and the far-reaching influence of the smart industry led by science and technology, information technology and other industries in the social transformation, the traditional definition of the industry has been broken and the new industry has received considerable attention. The entrepreneurs in the industry are obviously different from those in traditional industries. Their last occupation may be engineers, it's elite, doctors, pharmacists, and so on. They are more willing to choose a dress in an easy, witty manner. The "hard lines" of suits are weakened. Men's clothing is no longer devoted to wrapping men into traditional, angular triangles; instead, men's clothing can be as loose and flowing as women's clothing. This loose version has obvious traces from the tooling, which is a feature that facilitates manual work. Designers such as Jil Sander and Silvia fendi, who have always been forward-looking, have long begun to seek inspiration from work clothes such as doctors and computer engineers. This is naturally the most intuitive reflection of the social value orientation. The new generation of young people no longer regards financial financial leaders as their only goal. Here, I am not willing to make a final conclusion for the "new tooling." It is a direction, we will wait and see!

In the women's world, change begins with advanced customization at the top of the pyramid. Although high-level customization is not at your fingertips, it is the benchmark and essence of the entire fashion industry. In the autumn and winter 2013 dior advanced custom show, the smell of a neoliberal spirit is inspiring. â€œHaute customization is not a serious dress that can only be worn on specific occasions. I donâ€™t like it. I think, psychologically and emotionally, he should be as easy to touch as clothing. The production is designed to allow women to wear it. This is about the relationship between modern women and fashion, her life style, and the psychology of experiencing culture.â€ This commentary by designer raf simons gives us a new direction for advanced customization: breaking the traditional sense of advanced customization. "Free advanced customization," he gave his design a name. Freedom is the starting point for change. The fashion industry is undergoing a process of self-reflection. Changes should not be rigidly adhered to in terms of form and detail, and the transformation of ideas and concepts is fundamental. But one thing is certain. From the shackles of getting rid of the body to getting rid of the shackles of clothes, modern fashion ** is just around the corner!